The Samjiyon City project is one of North Korea’s largest redevelopment projects. It has involved the construction of the Hyesan-Samjiyon Railway, new power and telecommunications infrastructure, and the almost complete redevelopment of Samjiyon Township.

Hundreds of new buildings have been constructed, two new railway stations added and many tourist and propaganda sites have been erected in the space of a few years.

The town has significantly increased in size as the following images show. The first is from October 4, 2017, and the second from September 26, 2019. 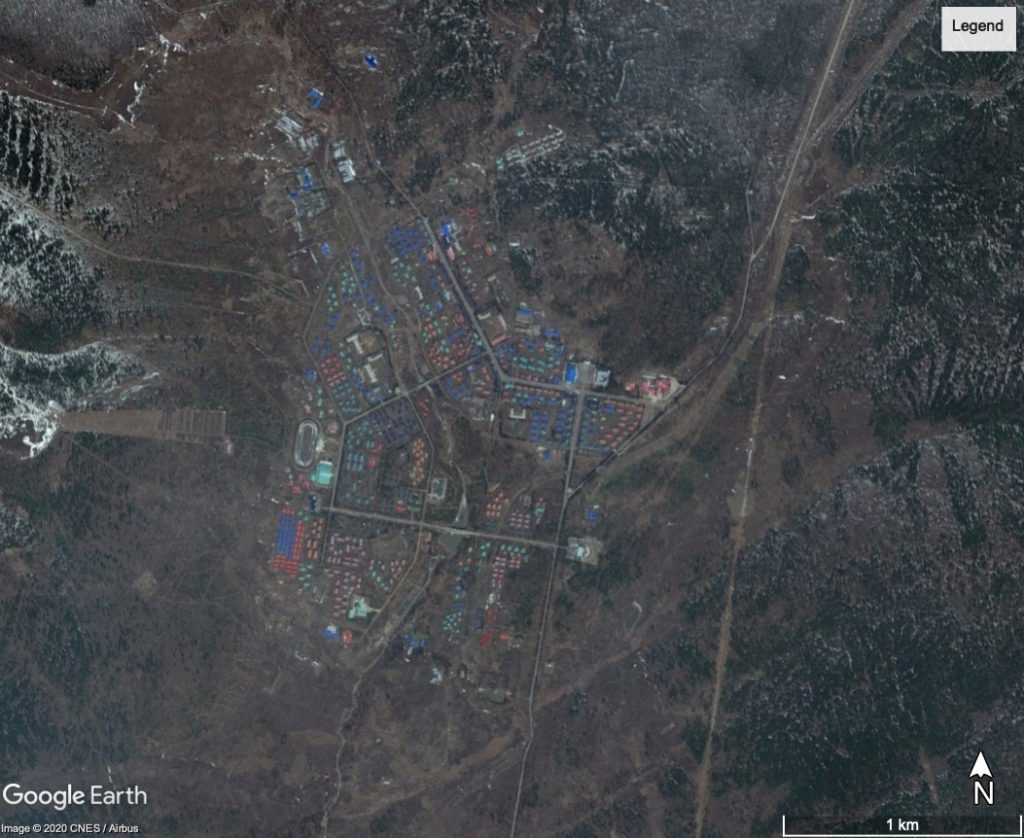 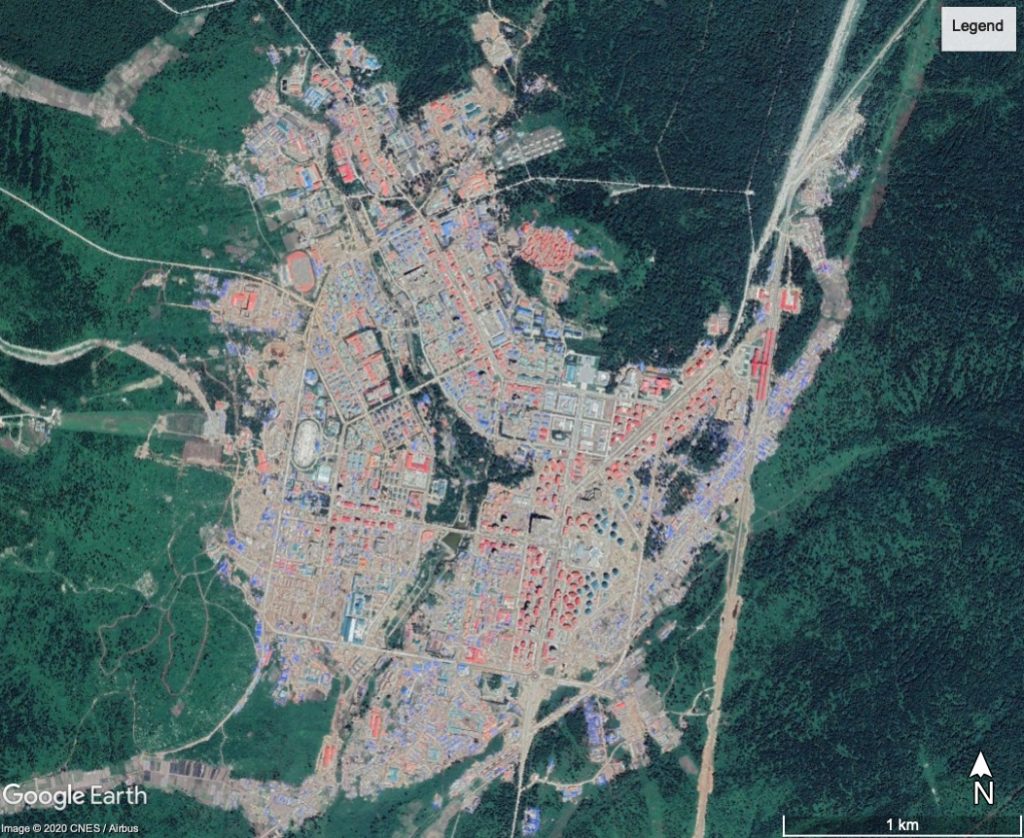 Much of the construction work is being carried out by 216 Division (216사단) of the Korean People’s Army. The division’s name is featured prominently in North Korean state media reports and propaganda, as seen below.

Construction work is also being undertaken by university and college students who, according to North Korean media, volunteered for the job.

Until the project began, Samjiyon was a relatively small county in North Korea. With a population of 31,471 according to the 2008 census, it was the smallest of 11 counties in Ryanggang Province in the north of the country.

But despite its relatively small population, the county has always played an outsize role in North Korean propaganda and state propaganda as it is home to Mt. Paektu, the mythical birthplace of the Korean nation.

North Koreans are taught that Kim Il Sung conducted revolutionary anti-Japanese activities in the area and that Kim Jong Il was born there at the Paektusan Secret Camp. Korean officials and school children go on annual trips to the area.

Birth of the Project

The project began with Kim Jong Un’s first visit to Samjiyon as leader on November 29, 2013. With the visit, Kim was retracing the steps of his father, Kim Jong Il, who visited the Samjiyon area many times as leader.

During the trip, Kim Jong Un visited the Samjiyon Grand Monument, which is about 3 kilometers to the northeast of Samjiyon township.

The monument is of a 27-year-old Kim Il Sung and marks battles against the Japanese in May 1939. It sits on Lake Samji, which is the largest of several small lakes in the area.

He also visited Samjiyon Schoolchildren’s Palace, Pegaebong Noodle House, the Samjiyon Hall of Culture and sports village that had been built to train skiers and other athletes.

State news agencies did not detail the full extent of the project at the time but a KCNA report said Kim “set forth important tasks to be implemented by the county.” He also signaled the importance of the project when he called on “national institutions and the province” to assist Samjiyon county “and for the whole country to help.”

A KCNA report in December 2019 confirmed that 2013 was the start of the plan. “Supreme Leader Kim Jong Un…unfolded the far-reaching plan for sprucing up Samjiyon County when he visited it in November, Juche 102 (2013),” it said.

The next year and a half was probably spent planning the project as it didn’t receive another mention by KCNA until June 2015 when construction was first mentioned.

The first stage of the project appears to have begun in mid-2015 with the start of the construction of the Hyesan-Samjiyon Railway.

During a field guidance visit in April 2015, Kim Jong Un called on workers to have the number 1 and 2 stations ready by October 10 that year, which was the 70th anniversary of the founding of the Workers’ Party of Korea.

Workers met that goal a week early on October 4, according to state media. It was then that the three power stations were given a new name: the Paektusan Hero Youth Power Station. The name was apparently changed after Kim Jong Un deemphasized the songun (military-first) policy of North Korea.

In Samjiyon Township, one of the first projects completed was the erection of a statue of Kim Jong Il. This statue is located much more centrally than the Kim Il Sung at the Samjiyon Grand Monument.

In September 2017, KCNA reported that the 216 Division had laid fiber optic cable to Samjiyon. The cable would help farms, schools and industrial establishments connect to the national intranet and distance-learning network. The work also included the expansion of North Korean TV coverage with new transmitter relay stations.

Stage two of the project involved the complete renewal of Samjiyon Township.

The scale of the redevelopment of Samjiyon was immense with most of the town having undergone redevelopment. Satellite images from before and after the project show a town completely changed.

The city was divided into several broad zones for government and cultural institutions, an industrial area, housing and a large area devoted to sports including. The Rimyong River, which runs through Samjiyon, was also dammed to create a small lake that sits at the heart of a park in the center of the township.

North Korean state media reported the project involved the demolition of 200 buildings “in just a little over ten days” and construction of 380 new buildings including apartments for 4,000 families. The demolished buildings included many single-family dwellings.

As he has done with other major projects, Kim wasn’t afraid to criticize problems he noted as the construction progressed. The reporting of these by state media underlined the message that Kim was expecting high standards from the workers.

When Kim Jong Un visited to inspect work in July 2018, he hinted at construction issues. During the visit, he called on project leaders to “ensure the quality of construction on the highest level by intensifying the guidance and supervision of construction without concentrating on the speed only,” according to KCNA.

Kim revisited Samjiyon 40 days later and—apparently as a result of his July critique—found “the area has changed beyond recognition, noting with satisfaction that a majestic appearance finally began to emerge,” reported KCNA.

He also found new fault with the construction of the Hyesan-Samjiyon railway and ordered that part of the railbed be redone.

“On his way to Samjiyon he could see that the newly paved Hyesan-Samjiyon railway section roadbed was not done well and scientific measurement and the requirement of technical method of construction was not ensured in terms of roadbed condition and evenness,” said KCNA.

During the July 2018 visit, Kim reportedly told officials that roof colors should be matched to their use and exterior wall colorings made to suit the natural forests that surround the area. Images of Samjiyon show several different colors of roofing were ultimately used in the project.

The sports training facilities built at Samjiyon are especially noteworthy. They include a ski slope, facilities for ice hockey and speed skating and an equestrian training center. There are also dormitories for visiting athletes.

The redevelopment project was declared completed on December 2, 2019, when Kim Jong Un attended a ribbon-cutting ceremony in the town. A week later on December 10, Samjiyon County was redesignated Samjiyon City.

Upon its completion, KCTV broadcast a documentary that gave a good look at what the town had become.

The third stage of the plan is currently underway and is larger in scale than the previous stages, according to a state news report.

It involves the construction of “20-odd main objects and the pavement of roads extending tens of kilometers.” Included in the plan are “thousands of houses, public and production buildings and more than 750 structures in 10-odd districts and farms of the city.”

In May 2020, state media reported the frames of over 80 apartment buildings for more than 300 households and at least 10 public buildings had been completed as part of the work.

As are many other projects in North Korea, it is targeted for completion in October 2020, to mark the 75th anniversary of the Workers’ Party of Korea.

38 North is a project of The Henry L. Stimson Center.