The Wonsan-Kalma Coastal Tourist Area project is a large-scale tourist zone on the eastern coast of North Korea.

The centerpiece of the project is the redevelopment of the Wonsan-Kalma Airfield and Kalma Peninsula into a modern airport and a tourist area with multiple high- and low-rise buildings along a 4 km beach.

The new airport opened in September 2015, but construction of the beach resort didn’t get under way until 2018. When it did begin, progress was rapid with multiple high and low-rise buildings being constructed within a year.

The resort was supposed to open in April 2019, but the deadline was delayed several times and little progress has been made since. The Covid-19 pandemic forced the suspension of tourism nationwide in 2020 and the project has dropped out of state media headlines.

In this article, we look at the history of the project, its lofty ambitions and apparent drop in priority as its shine had faded for now.

History and Prior Development

Before the Kalma Peninsula was picked to be home to this major tourism development, it was home to several Korean People’s Army (KPA) facilities.

In addition to Wonsan Air Base, the northern end of the peninsula housed the Kalma Rest House (갈마휴양소) of the KPA Air Force, a theater, a palace and a KPA artillery testing ground, according to an analysis by Curtis Melvin in NK News.

Sometime between 2002 and 2009 (there is a long gap in Google Earth satellite imagery), redevelopment took place that saw the rest house converted into the Saenal Hotel and the palace into the Kalma Hotel. A gymnasium was built on the site of a KPA sports ground and what appears to be a new rest home was built for the KPA.

On the beachfront alongside the Kalma Hotel, new chalets were constructed and the development was featured on KCTV as the Myongsasipri Bathing Resort.

While not part of the Wonsan-Kalma redevelopment project, this early work is worth mentioning as it was some of the first in the evolution of the peninsula towards civilian tourism.

Planning for the tourist zone began in 2013 and the basic plan for the area had been decided by the end of the year. It became official on June 11, 2014, when the Presidium of the Supreme People’s Assembly issued a decree declaring the “Wonsan-Mt. Kumgang International Tourist Zone” was to be built.

As envisaged at the time, the zone would become an international tourist destination with beaches, the recently-opened Masikryong Ski Resort, natural attractions such as the Ullim Waterfall and Mt. Kumgang and other historical spots.

The center of the zone would be Wonsan City and the neighboring Kalma Peninsula, which would be home to a new airport and many hotels. It would even feature an underwater hotel, flower park, international meeting hall, exhibition and exposition hall and stadium.

The North Korean authorities were thinking big and said the beach would be able to hold up to 100,000 people. It would be more than just a domestic resort, too. Early reports on the plan say one of the reasons Wonsan was chosen was because it’s less than two hours flying time from major cities in China, Russia and Japan. It also sits at a major railway junction with service to Dandong, China, via Pyongyang, and Khasan, Russia, via Hamhung and Chongjin.

The Wonsan Zone Development Corporation outlined 70 investment projects open to foreign investment (see PDF, below) and the project was the only special economic zone mentioned by Kim Jong Un in his New Year address for 2015.

Building work on the Kalma Peninsula began sometime between March and July 2014, according to Google Earth images, with farmland around the existing airfield bulldozed for a new third runway parallel to the current runway 5/33. By August 2014, large amounts of farmland had been cleared for an expanded apron and modern terminal.

The first building of the beach resort area, adjacent to the airport, also began to rise before the end of 2014.

Kim Jong Un made his first reported visit to the tourist area in late July 2015, when he judged a North Korean Air Force flying contest.

At the time of the contest, construction of the Wonsan-Kalma International Airport terminal building appeared mostly complete, the new runway was laid and two additional buildings had been constructed: a viewing pavilion that overlooked the yet-to-be-developed beach tourist area and a covered hangar with companion terminal.

The observation building can be seen in a photo from Kim’s July 2015 visit.

Development of the 4 km long resort area didn’t get underway until 2018, when a large number of new buildings popped up in less than a year.

Then-Premier Pak Pong Ju visited the site in mid-February and early-April to check on construction before Kim Jong Un made his first visit to the work site in late May 2018.

During the visit, Kim told builders that he wanted the resort completed in less than a year: on April 15, 2019. The day is significant as the anniversary of the birth of Kim Il Sung and is the most important holiday in North Korea.

But that was a date the workers would miss, in no small part due to Kim’s demands made at subsequent visits.

The first of those visits took place in mid-August and Kim asked for some fairly major redesigns.

Noting that buildings look separated and are little different from each other in height, he gave instructions to make the height of the buildings different, plan more hotels and service buildings 30 and 25 storeys high and ensure that the connection between buildings are more harmonious and peculiar, so as to polish the overall street layout in an artistic way.

Kim also offered instruction on landscape design, on the need for artificial ponds to match their surroundings and to have angling sites and for first aid stations to be placed around the site.

Photos from the visit included this one that laid out the overall project and its stages:

He was back in late October with more demands.

He instructed officials to envisage the construction of more hotels and inns with over 30 floors as he told in August and to arrange an office building which will house party and the working people’s organization committees, the management committee, the security organs, the judicial and prosecution organs, etc. as a high-rise building near the coastal area so that they can become part of the street.

He also gave the officials a detailed orientation to build more game arcade, all-event stadium and movie houses within the area and plan a large water park and funfair in the vast area between the coastal line and the airport.

He gave the officials the task to build a huge parking place in the area, rebuild the Kalma station and deeply study the issue of settling the public transportation in the area.

The necessary redesign meant the project would blow past its April completion target and Kim set a new date of October 10, 2019, although that would also be missed.

The level of the new work required by Kim’s instructions could be easily seen in satellite images. 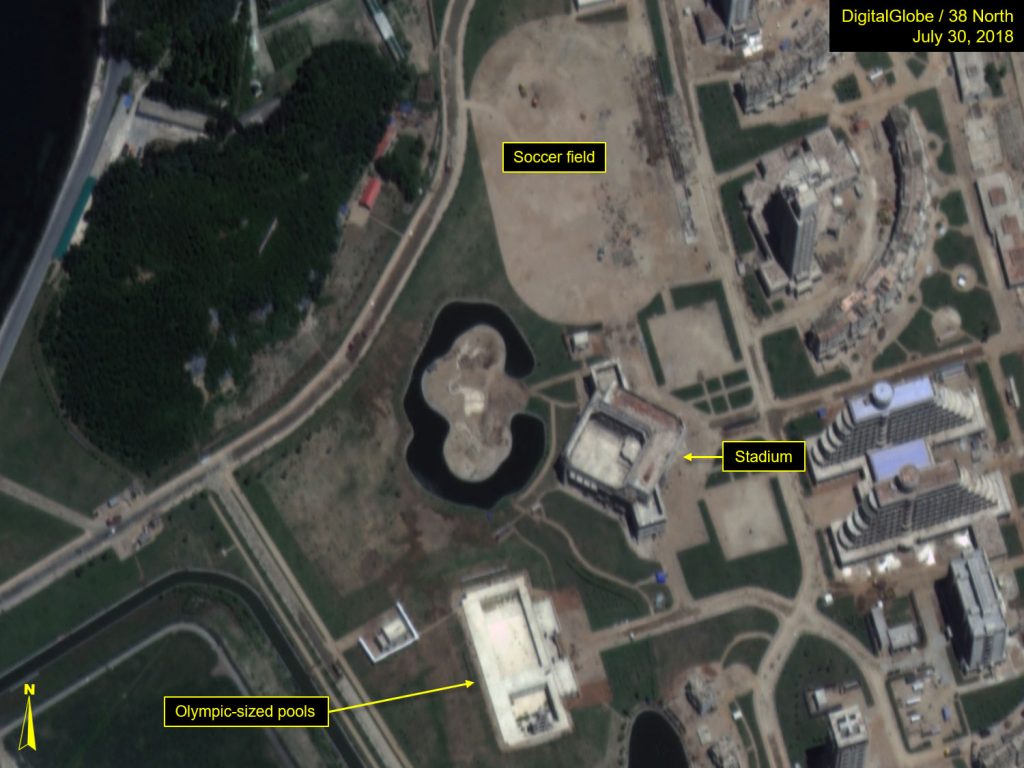 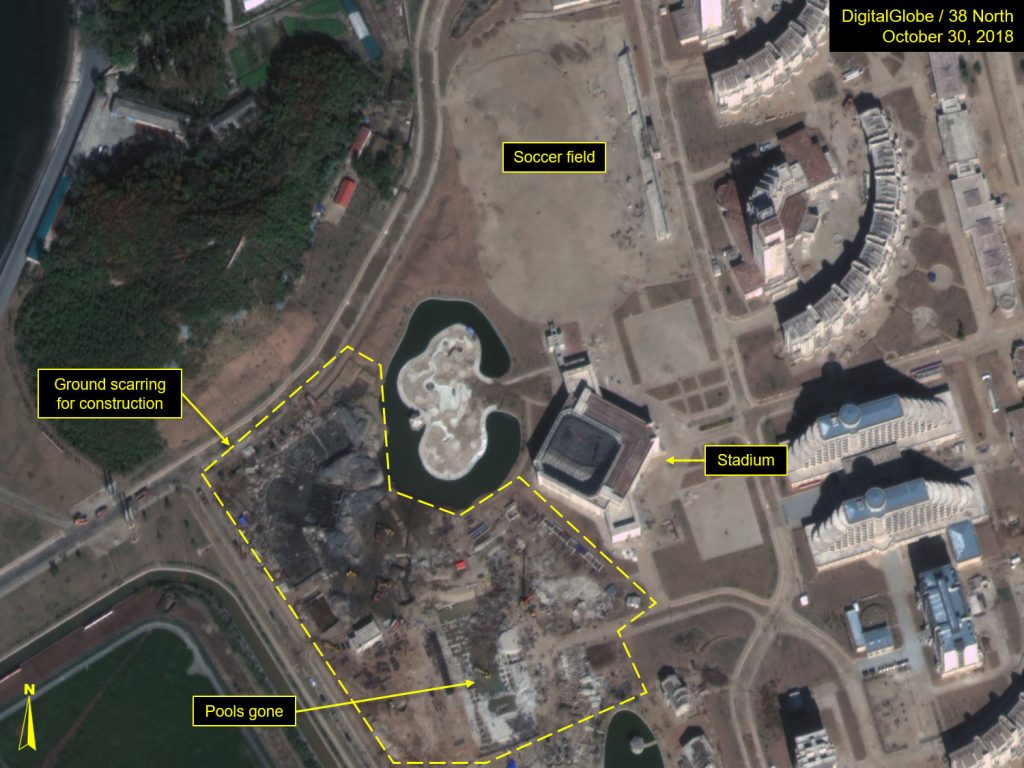 At the north end of the development, an Olympic-size swimming pool that had already been completed was demolished to make away for a large hotel. Several man-made lakes that dotted the central part of the resort were filled and replaced with buildings and other structures were added or expanded.

Kim’s next visit was in April 2019, and this time he liked what he saw.

He said that the shortcomings … were made up. He expressed with great satisfaction, saying that the whole of the street formation looks elegant artistically and fairly good and that the area is very spectacular.

But, he wasn’t done with advice. He told project managers of the need for a tram line on the promenade, bicycle baths, electric cars, floating piers and even street furniture.

As a result, the opening of the resort was pushed back again to April 15, 2020. State media put a spin on the year-long delay as necessary to make everything perfect.

The builders should not push forward the construction of the Wonsan-Kalma coastal tourist area in speed campaign to finish till the Party founding anniversary this year after the sea-bathing season, but postpone the construction period six months until the Day of the Sun next year to perfectly finish it…

May and August 2019 saw additional visits from Premier Kim Jae Ryong and former Premier Pak Pong Ju. In November, Kim Jong Un was at the neighboring airport to watch the KPA Air Force flight contest, but KCNA didn’t mention a trip to see progress at the resort.

April 15, 2020, came and went without a word from state media about the progress of the project. Satellite imagery showed several buildings had yet to be completed and it wasn’t until May 2020 that state media reported the electric cars Kim had ordered has been completed.

Little progress has been made and from September, construction workers were seconded to help on reconstruction efforts in communities hit by powerful typhoons in August and September.

As 2020 draws to a close, the current opening date is unclear.

The Wonsan-Kalma area has been the launching point for several missile tests during the construction of the tourist resort area.

The first took place on March 3, 2014, when two Scud-C missiles were launched from the Wonsan-Kalma International Airport towards the waters to the east of North Korea.

A string of early-morning tests followed in 2016 and 2017, including one on March 22, 2017, that failed. The apparent aftermath of the launch explosion was clearly visible in satellite imagery.

The tourist area has not been used for missile tests since June 22, 2016, but many continue to take place on the Hodo Peninsula, about 20 km to the north.

38 North is a project of The Henry L. Stimson Center.